Game-theoretic population learning enables strategic exploration in games with convergence guarantees to solution concepts such as Nash Equilibrium (NE). However, applying such method to real-world games that require approximate best-response solvers (such as deep RL) does not scale, due to the difficulty in iteratively training best-response agent.

We propose Neural Population Learning (NeuPL), a general and efficient population learning framework that learns and represents diverse policies in symmetric zero-sum games within a single conditional network via “self-play”.

In this section we visualize gameplays between 8 distinct policies, represented and executed by a single conditional network in a game of running-with-scissors1. 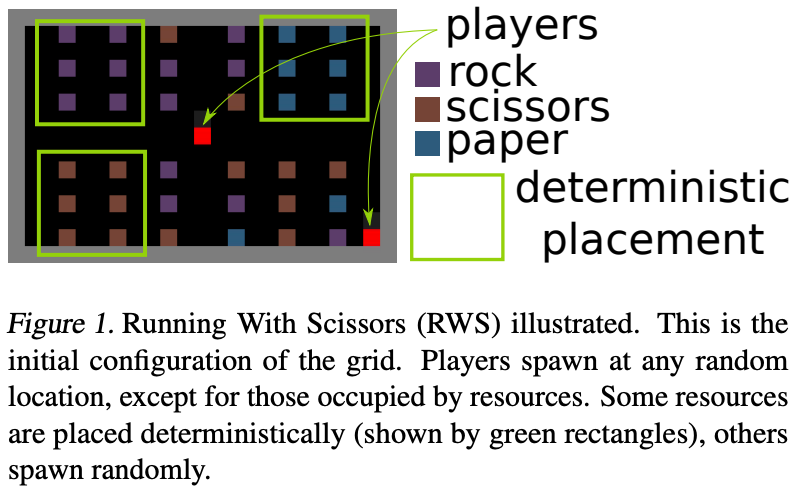 To do well in this case, players must learn to infer opponent behaviours based on its limited field-of-view (a 4x4 square in front of the player). For example, if rocks are missing from its usual location, then the opponent must have picked up rocks!

We show the training progression of a neural population of policies through time, starting from a fixed intial policy that always pick up all the rocks. Starting from the initial policy, we show that a single conditional network \(\Pi_\theta(\cdot \mid o_{<}, \sigma)\) discovered and represented a set of 8 distinct policies, each best-responding to combinations of others.

If you click on a cell in the payoff matrix, an example episode between the pair of policies would be shown. You can step through the episode and observe how the two players’ inventories change over time as well as their respective, partial view of the environment.

We investigate NeuPL in the physically simulated multi-agent environment of 2-vs-2 MuJoCo Football2, using the 3 DoF BoxHead walkers.

We note that beyond policy (3), it becomes difficult to tell different policies apart as they all are highly skilled and perform coordinated team-play. This is not surprising. MuJoCo Football is a fully-observed environemnt that affords prominent transitive skill dimensions but comparatively muted strategic cyles. In this case, NeuPL automatically reduces to a learning regime similar to that of self-play, which is optimal in purely transitive games3.